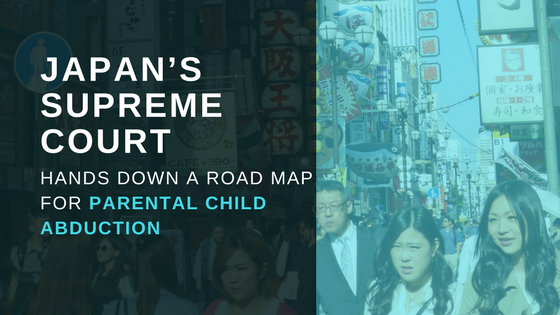 In 2014, after years of diplomatic pressure and countless horror stories about parents losing all contact with children taken to or retained in Japan, the nation finally joined the Hague Convention on the Civil Aspects of International Child Abduction. This should have relegated to history Japan’s growing reputation as a “black hole” of abduction of children by one parent — usually the Japanese one —after the breakdown of a marriage or other relationship.

Less than four years later, in a sadly predictable ruling issued on Dec. 21, Japan’s Supreme Court confirmed abductions can continue. The difference seems to be that lower courts will pay lip service to the ideals of the convention by going through the motions, and various well-intentioned institutions now exist to help achieve the amicable resolutions that should ideally end such cases. But visitation with taken children will still be difficult or impossible, return orders will remain unenforceable and, at the end of it all, courts will be able to find it best for the children to stay in Japan.

The baroque procedural regime adopted by Japan to implement the convention was designed to give lower courts various ways to avoid returning children. Now that the top court has ratified such a result, we can probably expect to see more cases like this.

Children will be the principal victims of such abductions. However, I can’t help but feel sympathy for Japan’s Ministry of Foreign Affairs. It bore the brunt of foreign criticism before Japan joined the treaty and, acting as Central Authority under it since , has devoted significant resources to resolving cases and helping the parents and children involved in such cases. This judgment will probably now make its job that much harder.

Escape hatches do their job

The case on which the court ruled has already been widely reported in the Western press. It involved the four children of an American father and Japanese mother.

According to the Supreme Court’s judgment they were brought to Japan by the mother in July 2014 with a promise they would be returned to their home in the United States the following month. They stayed. The following year the father applied to a Japanese court for a return order under the Hague Convention.

In 2016, the Osaka High Court issued an order that the children should be returned. The court found that the older children (11 at the time they were brought to Japan) were found to not want to return, but returning just the younger ones (who were both 6) would have been bad for all of them.

The basic concept underlying the convention is that children in these situations should be returned — promptly — by courts where they have been taken to their jurisdiction of habitual residence, and decisions about their long-term best interests should be made by courts there. The convention provides a few exceptions where returns can be refused, specifically: (i) if the child “objects to being returned and has attained an age and degree of maturity at which it is appropriate to take account of its views” and (ii) “there is a grave risk that his or her return would expose the child to physical or psychological harm or otherwise place the child in an intolerable situation.”

Having obtained a return order, the father then set about trying to enforce it. Here he encountered the unpleasant reality that Japanese family court orders involving children are generally unenforceable. No adults get arrested or even punished for noncooperation, meaning abducting parents (and the family members who often help them) can flaunt the law and the rulings of Japanese courts. This is relatively common knowledge within Japan, where even domestic divorces can see a child unilaterally taken by one parent and the other losing all contact for years. That a case like this would arise under the Hague Convention was always predictable; it was just a matter of when it would happen.

Whilst refusing to cooperate with the return order, the mother filed a motion to have the whole matter reconsidered based on changed circumstances. This was one of the escape hatches built into Japan’s implementing act — the ability of a losing party to seek a new trial (after an appeal!), even though the whole point of the process is to get kids back home as quickly as possible.

The Osaka High Court did rule expeditiously on this motion (impressive when one considers it can take years or even decades for a wrongly convicted criminal defendant to get a retrial based on new evidence) and — lo and behold — found it was no longer appropriate to return the child because the father lacked the wherewithal to support them. (That the father had been forced to pursue ruinously expensive cross-border litigation to remedy the abduction did not seem to matter.)

This was the other bolt-hole built into Japan’s implementing act: the ability of judges to consider the child-rearing capabilities of both parents in determining whether the exception in (ii) above might apply. In other words, the court did a custody evaluation about what would be in the best interests of the children, which is one of the basic things that is not supposed to happen in Hague Convention cases. The basic premise, again, is that custody determinations should be made by courts where the children have been habitually resident.

That this escape hatch would be used in a difficult case such as this was also predictable. Otherwise Japan’s courts would have suffered the ongoing bother and embarrassment of a demonstrably unenforceable return order hanging out in limbo in a high-profile case.

It is this ruling that the five judges on the Supreme Court’s 1st Petty Bench upheld. Judgments of Japan’s Supreme Court are often terse, particularly when dealing with subjects like excessive detention, police misbehavior, constitutional violations and so forth. Part of the rationale may be that, except in rare cases, the top court only considers appeals as to matters of law and does not revisit lower court findings of fact, and the judgment just needs to contain conclusions about the applicable law.

When it comes to family cases, however, the court sometimes breaks from this staid mold and its judges presume to explain what is best for children they have never even met. In their December ruling the court declared in no uncertain terms that “the appellant (father) lacks the financial basis to appropriately care for the children, and cannot be expected to receive ongoing support in their care and support from his family.” It would thus be bad for the children to be returned to America.

That in the course of ruminating on the best interests of the children the judges did not find it worth mentioning that they had been denied all contact with their father during the entire process is simply indicative of how little importance the Supreme Court attaches to the parent-child relationship, at least when it is inconvenient to the result that best suits the court system.

At risk of sounding repetitive, who is best suited to care for the children is precisely the type of decision that the Hague Convention expects to be made in the home country. Moreover, Article 20 of the treaty clearly states that “a decision under this Convention concerning the return of the child shall not be taken to be a determination on the merits of any custody issue.” Perhaps the court just found this language inconvenient when for all intents and purposes it conclusively determined the merits of the custody issues in this particular case — where the children would grow up and who would raise them.

There you have it. Courts in other countries should now be on notice that, despite Japan joining the Convention and a diligent Central Authority providing assistance to parents of taken children, return orders issued by the nation’s courts remain unenforceable, contact can be safely denied, Japanese judges looking for ways to let children stay in Japan can simply find fault with the left-behind parent’s imagined parenting capabilities and higher courts will ratify that decision as being “in the best interests of the children.”

By demonstrating such a low threshold for refusing returns and condoning noncooperation with enforcement proceedings, the Supreme Court’s ruling seems likely to serve as a road map for further abductions to come.